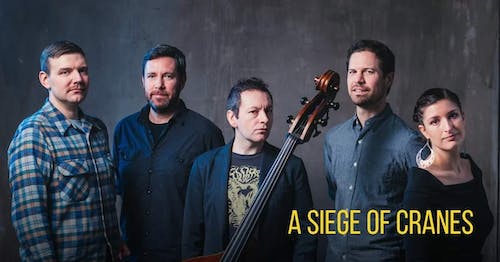 iCal
Google
PJCE kicks off their season, fusing its eight-piece horn section with the iconic Portland band Blue Cranes for a collaborative concert!

PJCE kicks off the 2019-2020 mainstage season, fusing its eight-piece horn section with the iconic Portland band Blue Cranes for a collaborative concert featuring new arrangements by Reed Wallsmith, Joe Cunningham, Kyleen King, and Quinn Walker (who is an alumnus of PJCE’s Grasshoppers Young Composers mentorship program) of Blue Cranes compositions. Blue Cranes will both play on their own and with the PJCE Horns in five original arrangements for two sets at Holocene on Thursday, November 21. Tickets are available to PJCE Sustainers immeadiately. All single tickets will go on sale October 1.

Among Portland jazz bands, none has a greater sense of itself than Blue Cranes. Where most jazz bands rely on shifting groupings of players, Blue Cranes have forged an ensemble sound, emphasizing the collective over the individual. Their Venn diagram of influences includes indie rock, free improvisation, and jazz, putting at its center “Rich melodies and dynamic interplay,” as the Los Angeles Times put it. Their tight-knit synergistic approach, dramatic musical vision, and compositional originality make them a perfect companion for PJCE, a rapidly growing organization committed to building an inclusive, creative, and verdant present and future around jazz in Portland.