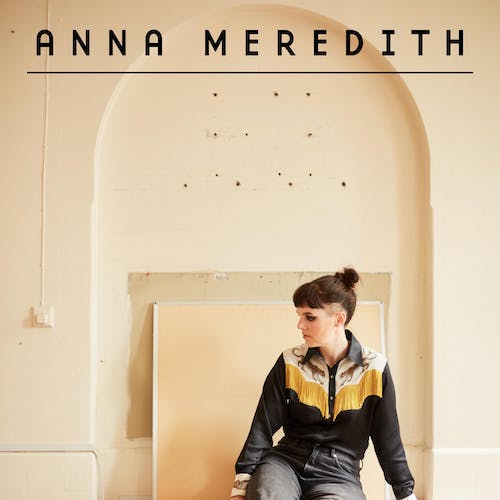 Anna Meredith is a composer, producer and performer of both acoustic and electronic music. Her sound is frequently described as ‘uncategorisable’ and ‘genre-defying’ and straddles the different worlds of contemporary classical, art pop, electronica, ambient installations and experimental rock - or as the Guardian said: "majestic bangers"...

Her music has been performed everywhere from the BBC Last Night of the Proms to flashmob body-percussion performances in the M6 Services, PRADA & Fendi fashion campaigns, numerous films, installations and documentaries, pop festivals, clubs and classical concert halls worldwide and broadcast on Radio 1, 2, 3, 4 & 6.

Her debut album, Varmints was released in March 2016 on Moshi Moshi/PIAS to huge critical acclaim with numerous 4 and 5 star reviews from press and media around the world including Pitchfork’s coveted Best New Music. Varmints was Loud & Quiet's Album of the Year 2016 & won the 2016 Scottish Album of the Year (SAY Award).

She is published by a new partnership between Warp Publishing & Faber Music Publishing, and is one of the first Somerset House Studios Residents. Much to Anna's surprise she was voted Number One in The List's Hot100 (of Cultural Contributors to 2016).

Anna is also a regular presenter for BBC Radio3 and 6Music and a radio and TV guest, judge and panel member on numerous shows including as Goldie's mentor for the TV show Classic Goldie.

She has been Composer in Residence with the BBC Scottish Symphony Orchestra, RPS/PRS Composer in the House with Sinfonia ViVA, the classical music representative for the 2009 South Bank Show Breakthrough Award and winner of the 2010 Paul Hamlyn Award for Composers.

Her recent piece Connect It was written for the BBC’s award winning Ten Pieces scheme which involved half of all UK Primary school children working on Connect It as well as Anna leading broadcasts, workshops and performances including at Radio 2’s Proms in the Park to 40,000 people.

After a sell-out Varmints album shows (awarded 5 stars by the Guardian) at London’s ICA & Scala, the band are touring and performing at numerous UK and EU headline shows and festivals throughout 2016/2017 including Glastonbury, Field Day, Latitude, Rewire, End of the Road, & Transmusicales.

In March 2017 the band went on their first US tour including performances at SXSW, which the New York Times reviewed as "sheer exhilaration" while NPR's Bob Boilen described the show as "a stormy, ecstatic, endlessly danceable thrill to behold...the best artist I've seen at SXSW and one of the most creative bands I've seen in years. Music for the head, the heart, the ass and the feet".

Other recent projects have included collaborations with Laura Marling and The Stranglers for the first 6Music Prom, commissions for the Aurora Orchestra, Scottish Ensemble, Netherlands Chamber Orchestra and Living Earth Duo, Installations for Sleep-Pods in Singapore and Park Benches in Hong Kong and the world's first Concerto for Beatboxer and Orchestra. Projects in 2016 included a new piece for the Kronos Quartet, working with her sister, illustrator Eleanor Meredith on a new piece Anno, incorporating Vivaldi's Four Seasons for the Scottish Ensemble, pieces for Big Band, remixes, arrangements of David Bowie for the Tribute concert at the BBC Proms and film work including new music for Jaques Audiard’s latest film Dheepan.

Plans for 2017 include an installations for the lifts inbetween M&S and Selfridges for Manchester International Festival, arrangements for Sigur Ros & the LA Phil in Disney Hall, an installation for custom whirly tubes and UV lights for the Barbican Centre and starting work on album two...