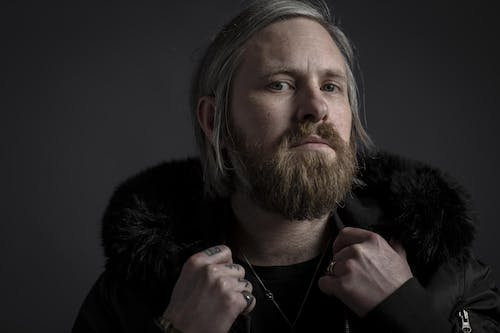 “In this post-industrial, post-enlightenment religion of ourselves, we have manifested a serpent of consumerism which now coils back upon us. It seduces us with our own bait as we betray the better instincts of our nature and the future of our own world. We throw ourselves out of our own garden. We poison ourselves to the edges of an endless sleep.

Animated Violence Mild was written throughout 2018, at Blanck Mass’ studio outside of Edinburgh. These eight tracks are the diary of a year of work steeped in honing craft, self-discovery, and grief - the latter of which reared its head at the final hurdle of producing this record and created a whole separate narrative: grief, both for what I have lost personally, but also in a global sense, for what we as a species have lost and handed over to our blood-sucking counterpart, consumerism, only to be ravaged by it.

I believe that many of us have willfully allowed our survival instinct to become engulfed by the snake we birthed. Animated — brought to life by humankind. Violent — insurmountable and wild beyond our control. Mild — delicious.

This is perhaps the most concise body of work I have written to date. Having worked extensively throughout my musical life with dramatics, narrative, and ‘melody against all odds’, these tracks are the most direct and honest yet. The level of articulation in these tracks surpasses anything I have utilized before.”

Helm is Luke Younger, a London-based sound artist and musician. He has released five studio albums and three EPs of textural experimental music, exploring a relationship between acoustic, electronic and real-world sounds. His first album ‘To An End’ was released on his own label ALTER in 2010. Influenced by 20th century electroacoustic music and Britain’s esoteric post-industrial underground, the record contained two long-form pieces that mixed haunting, respiratory-themed tape music with warm meditative ambience. ‘Cryptography’ followed a year later via Graham Lambkin’s KYE as a five-part suite of glacial drone, reconfigured gamelan clusters and searing metallic resonance. Warmly received by the press and underground community alike, it helped to establish him as a serious new voice in experimental music.

2012 saw the beginning of a working relationship with PAN. His third album ‘Impossible Symmetry’ was released with more of an electronic sound, a result of sessions experimenting with analog synthesizers and rhythmic patterns. Helm performed regularly across Europe, Asia and even North-Africa (Rawabet, a live album of his show in Cairo was released on ALTER in 2017). From galleries to clubs, squatted venues and major festivals, performances took place in a multitude of different contexts including an opening act for a disparate range of groups including Iceage, Godspeed You Black Emperor and Oneohtrix Point Never.

During breaks from touring Younger entered the studio to work on ‘Olympic Mess’. Using repetitive loops to signify motion and movement, Helm’s sound morphed into something upbeat and airy thanks to flirtations with dub-techno and Balearic disco. ‘Olympic Mess’ was released in 2015 and received critical acclaim and support from press and featured in a number of end of year album lists. The sprawling, hypnotic, sometimes euphoric soundscapes act as a counterpoint to the chaos they arose from, as Younger says: “it’s about exploring a perverse desire to pull the rug from under yourself, and the struggle to achieve a healthy equilibrium between one’s own personal and artistic lives… Dealing with the problematic consequences of pushing your own limits, forming and dissolving relationships, transient lifestyles, physical and mental exhaustion, excess and other kinds of personal chaos.”

‘Chemical Flowers’ is Helm’s fifth full-length studio album, arriving in a moment of anxiety and tension without a clearly definable source. Younger states own internal questioning of the mechanisms of music and art and how he engages with each have had an influence. “I find myself asking, how complicit am I in structures I consider to be at odds with myself?” he says, “How can the cultural playing field be truly equal and inclusive whilst it’s increasingly co-opted and controlled by corporations, brands and gatekeeper-sociopaths, perpetuating an endless hierarchy and class imbalance?”. For the majority of the album the themes are diffuse, with the anxiety offset by anecdotes and snippets of conversation overheard in daily life. Across the album Younger weaves varied sound sources through channels of process, with string arrangements by J.G. Thirlwell to broaden the instrumentation and introduce an element more identifiably human. Thirlwell’s arrangements feature heavily on ‘I Knew You Would Respond’. “The intention to use strings wasn’t to explore a neo-classical route but instead make something a bit darker, dramatic and even psychedelic.” Chemical Flowers also features contributions from saxophonist Karl D’Silva, cellist Lucinda Chua and is the first album that Younger has produced and engineered himself.

Younger is a resident DJ on NTS Radio where he has presented his monthly show ‘After Dark’ since 2016. He has also engaged in collaborations with visual artists. A performance at the opening of the Tate Modern’s Tanks space saw Helm perform with video artist and film maker Charles Atlas’ during his ‘Charles Atlas and Collaborators’ series. Subsequently Atlas used edited arrangements from Olympic Mess in his 2015 exhibition “The Waning Of Justice” for Luhring Augustine gallery in New York City. Younger also returned to The Tanks in 2016 to perform in an ensemble using a collection of unorthodox instruments for Tarek Atoui’s “The Reverse Collection”. The same year saw Unsound Festival commission the project “Inner Space: Siberia” with Moscow based musician Moa Pillar and the Embassy For The Displaced, an Athens-based design collective. The project was a location-based A/V collaboration exploring the landscapes of Siberia with audio recorded in Moscow and visuals filmed in the Ural Mountains and Novosibirsk. It premiered at the Vladivostok Film Festival that year with a subsequent performance at Unsound Krakow to an audience of 2000. In support of ‘Chemical Flowers’, Helm has a residency at Cafe OTO, London in October 2019 and will be performing internationally the rest of the year.