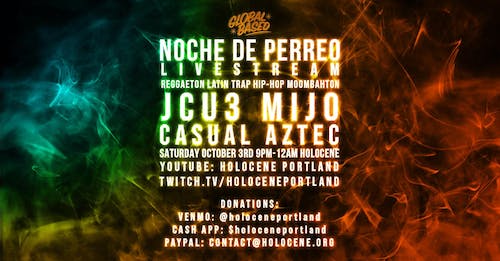 Presented by Global Based

iCal
Google
THIS LIVE STREAM EVENT HAS BEEN POSTPONED DUE TO CIRCUMSTANCES BEYOND OUR CONTROL. STAY TUNED FOR A NEW DATE LATER THIS FALL!

Stream will happen on our YouTube and Twitch accounts starting at 9pm.

Donations are encouraged and appreciated, with all donations split between the artist and Holocene. Send a donation here on Eventbrite, or use one of the following methods:

Casual Aztec: ‘Casual Aztec’ is a DJ based in Portland, Oregon. In 2012 she founded the curatorial project/ queer party, Club Culo, focusing on international club, neo perreo, trap, dembow, dancehall, and latin house. She has been featured in Vice Magazine, Tom Tom Magazine, and Discogs. She is also a member of No Control, a crew of queer DJs, producers and party throwers.

MIJO: International DJ & local party curator, MIJO is the founder of Global Based. Dipping into all things Global bass music, MIJO is a local selector that embodies everything that Global Based is about.

Based in Portland Oregon, we are an underground monthly put on by people of color for people of color. We’ve garnered support from a very tightknit community and lead the global bass scene in the NW. Now entering our fourth year of hosting parties, we’ve managed to carve out a high-energy tropical space in a city with relatively low key nightlife. We strive to showcase underground culture, and introduce the NW to new artists and sounds through carefuly curated events. Along with our Caribbean party aesthetics, we host world renowned artists and showcase the genres under the Latin & global bass umbrella. Expect something different every month -- we’d host a Reggaeton night and the next there would be a house & club function.Nothing compares to the energy of a Global Based party. We are for the people, and work to build a safe space for our community to express themselves freely.