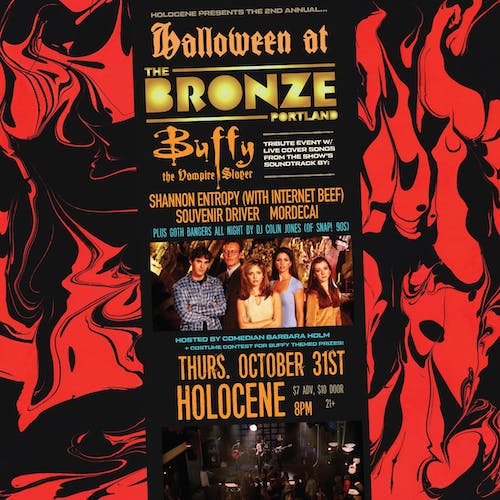 Halloween at the Bronze: Buffy the Vampire Slayer Tribute Party

iCal
Google
ADVANCE TICKETS ARE NOW SOLD OUT. THERE WILL BE LIMITED TICKETS AVAILABLE AT THE DOOR WHEN WE OPEN AT 8PM.

On Halloween night, back for a second year by popular demand, Holocene is THE BRONZE, the beloved nightclub of the Buffy the Vampire Slayer universe!

Buffy and pals danced, flirted, bantered and SLAYED inside the walls of the Bronze with a soundtrack by bands from Cibo Matto to Dingoes Ate My Baby. Tonight, Holocene is the Bronze!

We'll have a diverse array of live bands playing cover songs from the show's soundtrack, plus goth bangers all night by DJ Colin Jones (of SNAP! ‘90s Dance Party). New this year we welcome Souvenir Driver and Mordecai to bring their versions of Buffy soundtrack gems, plus welcoming back our very own Nerf Herder: Shannon Entropy (with Internet Beef).

Costumes strongly encouraged - Buffy themed, or to get meta, just a rad Halloween costume to be a costumed Bronze-goer! It's Halloween at the Bronze, after all.

“The Bronze. It’s the only club worth going to around here. They let anybody in, but it’s still the scene. It’s in the bad part of town.” ―Cordelia Chase