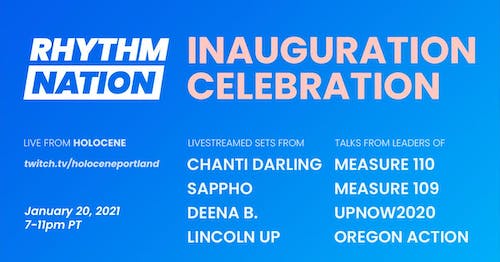 January 20th marks the end of the Trump era, the end of the Majority Leader McConnell era and is a chance to celebrate the landmark local and statewide victories on the Oregon ballot.

We’ll be celebrating with an-hour long panel discussion with the leaders of those Oregon measures about what’s next on their agenda and the importance of continuing to build on these victories.

The panel will be followed by Dj sets from 8-11pm from Chanti Darling, Sappho, Deena Bee, & Lincoln Up live streamed from Holocene to your living room.

The event will begin at 7pm with an hour-long panel discussion moderated by Peter Marks with the leaders of Measure 110 (Chief Petitioner, Anthony Johnson and Deputy Campaign Manager, Sami Alloy), Measure 109 (Campaign Manager, Sam Chapman) and Universal Preschool for All (co-ordinator John Bethencourt) to talk about their races and about specific things we can all do to further support their efforts. The panel discussion will be recorded and released as an episode of the Rhythm Nation podcast.

Rhythm Nation is a community organization that gives progressive organizers, initiatives and candidates a platform by bringing people together through music. It started as a podcast that explores the intersection of activism and music. Leaders of the victorious Oregon ballot measures were interviewed on the show, as well as national leaders like Senator Nina Turner and Misty Rebik. Music is integrated into every podcast episode and event.

Chanti Darling drinks deeply from the fountain of Disco, Boogie Funk, and the universe of house music. Chanti Darling weaves a sound that nods to the past as it blasts into the future; absolutely of the moment.

Sappho is a queer event producer and musical artist based out of Portland, Oregon. Harkening back to the most famous woman artist of antiquity, Sappho’s namesake has a strong connection to femme empowerment. Much like the fabled name that she built her base upon, she has often been the lone femme on a line-up. With over 20 plus years of involvement in the dance community, she is a mentor to queer and femme artists in event production and the art form of deejaying.

Deena Bee is a DJ and stalwart purveyor of great music in the ever-changing Portland music scene. She worked at local community radio station KBOO 90.7 as the station’s Urban Music Director from 1998-2018. Her influences are the Soul and Funk of midwest, the modernism of LA electro, an 80s childhood and the earnestness of Hip Hop from all over the world. Deena B’s sound is a sonic reflection of an Black artist living Black life in Portland, Oregon.

An agitator for radical music in the PNW for 2 decades, Lincoln Up is a DJ’s DJ who weaves together sounds from the way back when to the way up front, and carries them all forward in the spirit of originators of the artform, like Francis DeGrasso, Larry Levan, & The Electrifying Mojo. L^ has promoted, programmed and DJ’d on bills that centered many prime movers in music, including DJ Pierre, Peanut Butter Wolf, Derrick Carter, RP Boo, Octo Octa, DJ Technics, Todd Edwards, The Bug, Claude Young, Mike Huckaby, Ikonika, Digital Mystikz (Mala & Coki), & numerous luminous others. L^ conceived & co-founded the seminal PDX DJ/event production crew Bubblin (2010-2015), noted as “reshaping Portland’s dance (music) culture” by Willamette Week. L^ also devotedly serves as manager to Vektroid aka Macintosh Plus, and helps with her nascent multimedia endeavor Chronos & Vermilion.

Donations encouraged and appreciated, with all donations split between the night's artists and Holocene staff. You can make a donation at this Eventbrite link in advance, or during the stream on one of the following channels: