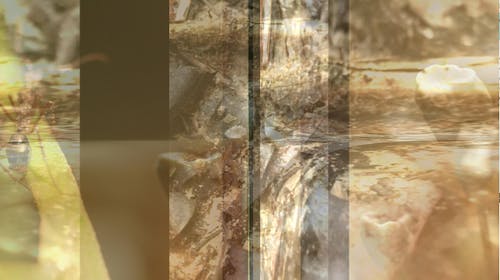 MUSIC AND FILM FOR THE BRAZILIAN AMAZON

iCal
Google
A night of audio-visual improv, immersive sound experiences and film screenings about and to benefit Amazonas.

and the US premiere of ​FLUX​ by

LEONARDO PIMENTEL is a percussionist from Manaus in the state of Amazônas, Brazil. He performs in the Amazonas Philharmonic Orchestra and has worked with many artists, orchestras, bands and groups throughout Brazil. He has composed soundtracks for theater and film, developing works in contemporary instrumental music mixed with amazonian elements. We will be showing "Percussivo Submerso" (Underwater Percussive), a solo presentation which uses images and sound captured by the musician underwater in a tributary of the Rio Negro.

NATHÁLIA FAVARO graduated in Architecture and Urbanism from Mackenzie University in 2006, from the Universidad de Buenos Aires in 2004 and has a postgraduate degree in Design from Senac in 2012. Since 2014 she has also worked with ceramics under the guidance of artist Kimi Nii. Her exhibitions include "The Gesture and the Void" at the Sacred Ground of Guarapiranga, São Paulo, Brazil and the collective: "La naturaleza de las cosas - Humboldt Idas y Venidas" at La Universidad Art Museum Nacional de Colombia, Bogota. She was a resident artist at the European Ceramic Workcentre in the Netherlands, Gaya Ceramics in Bali, Labverde (Brazil) and recently at Arteles Creative Center in Helsinki.

MIKI YUI was born in 1971 in Tokyo and has been based in Düsseldorf since 1994. She is an artist, composer, musician. Her works cross the boundary of music, performance, drawing, and installation. She investigates the grey zone of our perception, between the reality – imaginary. Her work is shown worldwide.

RENATA PADOVAN is a Brazilian artist living and working in São Paulo. She graduated with a BA degree in Social Communications from FAAP São Paulo, later followed by a MA Fine Art from Chelsea College of Art and Design, London, 2001. Her work might be synthetized as research associated with two fundamental conceptual axes: the border as limit and line, and the exercise of mapping. Reconfiguring what was previously known, Renata looks into nature both as a system and as cultural concept, creating works that deal with the idea of time as a tool that shapes matter. She has participated in several artistic residency programmes, such as Seoul Art Space Geumcheon, South Korea; JKSD, Slovenia; Arctic Circle, Norway; Nagasawa art park, Japan; and The Banff Centre for the Arts, Canada. Her work has been exhibited in galleries, festivals, institutions and museums in Brazil and abroad.

Established in 2004, the Institute of Conservation and Sustainable Development of the Amazon (IDESAM), is a non-governmental, non-profit organization. IDESAM’s headquarters is located in Manaus, Amazonas State, but our projects are spread throughout all the Amazon region. The scientific results of our projects are disseminated through technical publications, presentation and participation in conferences and workshops. By sharing our scientific results, we aim to stimulate discussion and debate in search of creative, appropriate solutions to the unique environmental and social problems of the Amazon. IDESAM’s projects are divided into the following themes: Climate Change and REDD+, Forestry and Technologies (PMTF), Sustainable Rural Production (PPRS) and Carbon Neutral (PCN), Public

Policies and Protected Areas. All activities, programs and funds raised are monitored by IDESAM’s governing board and independent audits

25 years ago, the Instituto Socioambiental(ISA) began the construction of its work in defense of the rights of indigenous people, traditional communities and the environment. Since its foundation, ISA has faced the challenge of seeking alternatives for the protection and territorial management of Indigenous Lands and traditional people — quilombolas, extractivists and riverside dwellers —, to strengthen the political participation of these communities and to value their culture and knowledge, besides helping to generate income through initiatives for the sustainable management of the natural resources of the territories. It develops actions at local and regional level working in the Rio Negro (Amazonas and Roraima), Xingu (Mato Grosso and Pará) and Ribeira de Iguape (São Paulo) watersheds. The Rio Negro is one of the most preserved regions of the Brazilian Amazon, on the triple border of the country with Colombia and Venezuela. The Xingu, in turn, is one of the main regions pressured by the advancement of the farming frontier in the Amazon and where indigenous, riverside dwellers and extractivists have been resisting. And Ribeira de Iguape, where is the largest portion of the remaining Atlantic Forest of Brazil, and home to quilombola communities, as well as other traditional communities. In common, these regions have a huge cultural and biological diversity and are considered as Brazilian heritage.

At a national level, ISA closely monitors legislative, executive, and judiciary proposals that may directly impact indigenous and traditional communities, and proposes alternatives to public policies in defense of these populations and the environment. It also monitors Indigenous Lands and Conservation Units throughout the country, following demarcation processes, the creation of protected areas and the threats that surround them, such as deforestation, infrastructure works, fires, mining, illegal mining and land grabbing, especially in Brazil's Legal Amazon, providing information and qualifying the public debate.