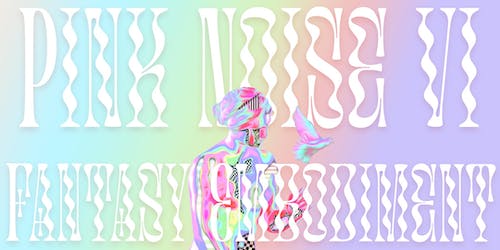 iCal
Google
Cast a digi-spell with us on the Spring Equinox! Pink Noise, Portland’s #1 witchual glitchual ritual, is coming straight to your computer.

Donation based tickets $5-$1000 , All proceeds go directly to the artists.

You will receive a link to our interactive zoom room after donating!

your favorite party of the year is back! Portland’s #1 witchual glitchual ritual is bringing you some of the best talent on the West Coast straight to your computer. Cast a digi-spell with us on the Spring Equinox.

When you hear fantasy embodiment, what do you think? In some major ways, we’ve all gone through transmutations throughout the pandemic. We may have questioned, where did my body go? Where are all of the other bodies I used to be near? We may have hidden ourselves away, or put ourselves in painful, scary, yet, necessary situations. We may have longed for touch, more than our own touch. Our bodily interactions have mostly been mediated, through masks, screens, boundaries….even now… fantasy embodiment can be an escape from our bodies, from our realities. A time to fully embrace the absurd, come out of our cocoons, and show off our new transformations.

Tune in 7:00pm - 1am PST for performances, video art, and rituals from:

Holocene is a music + arts venue, nightclub and events space in the core of inner-SE Portland. Since the summer of 2003, Holocene has been hosting touring acts from folk to minimal techno, Portland’s own most exciting musicians, unforgettable dance parties, and all manner of arts and multimedia parties that blur the line between highbrow and down-and-dirty. Learn more at holocene.org