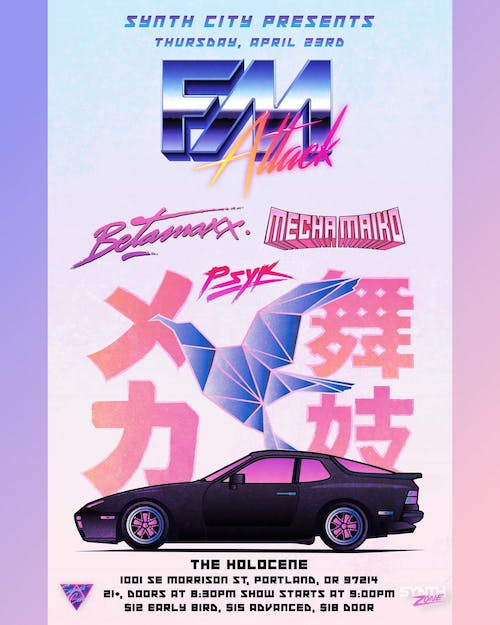 iCal
Google
THIS EVENT MUST ONCE AGAIN BE POSTPONED. ALL TICKETS WILL BE HONORED FOR THE NEW DATE IN 2021 (DATE TBA).

Synth City proudly presents: A Retro 80's Dance Party featuring for the first time ever in the PNW, FM Attack!

FM Attack has been a staple for the Synthwave scene since its start in the late 2000's.The Vancouver based artist is still riding high off one of the best retrowave albums of 2019 called "New World".

Joining him will be long time Synthwave pioneer Betamaxx, who came off another successful year with his latest gem of an album "Lost in a Dreamworld", right before he takes the stage the uniquely talented Mecha Maiko will be gracing the stage with her diverse sound. Opening the show will be none other than Portland based artist PSYK coming off his latest album release "Requiem".

Be sure to dress in your best 80's outfit for the chance to win Synth City goodies!