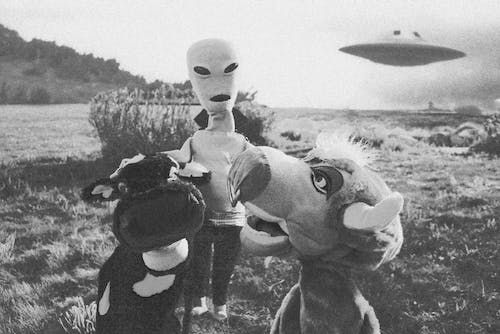 COWS IN PERIL! BIGFOOT BLAMED! THE TRUTH WILL SHOCK YOU!.

Puppeteers for Fears, the world’s greatest puppet rock band and comedy troupe, present Cattle Mutilation: the Musical!, a quintessentially northwest story of the generational divide, UFO sightings, and the search for Bigfoot. But with puppets. Written by Josh Gross, directed by Katy Curtis, and with live music performed by Derek Deon and the Vaughns.

Something is happening to the cows. They’re found in fields turned all about. Intestines on the out, and outsides in….

After a rash of cattle mutilations hits their small Oregon town, a rancher and his son set off into the woods to find the beast they’re sure is responsible: Bigfoot. Instead they find themselves in the middle of an intergalactic family dispute with potentially deadly consequences!

See the two-headed beast of the Rogue Valley live and in-person!

See if being good at video games is the same as having your flying saucer pilot’s license!

See the swinging surf rock soundtrack performed by Derek Deon and the Vaughns!

An expected combination of belly-laughs, heart, and catchy pop hooks you won’t be able to get out of your head, Cattle Mutilation: the Musical! is both a loving homage to campy pulp sci-fi, and something wholly original. This is the puppet rock musical about Bigfoot you couldn’t have imagined you needed, because it was too bizarre for anyone besides Puppeteers for Fears to have dreamed up.

The show is 90 minutes long with one intermission, and features twelve surf-rock and space-jazz inspired songs written by Josh Gross, and performed by indie-soul darlings, Derek Deon and the Vaughns.