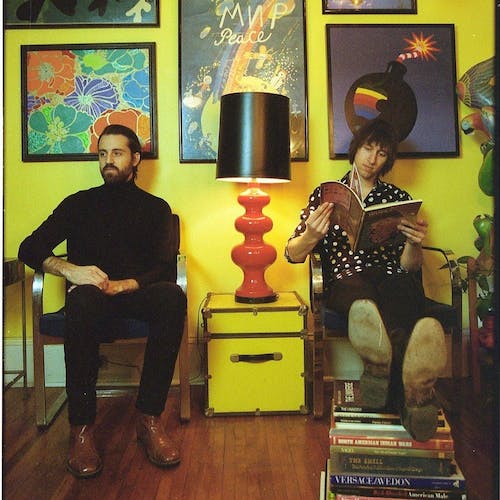 Shadowgraphs is a neo-psychedelic band from Charlotte, NC, and now based in Portland, OR, comprised of internationally known collage artist Bryan Olson and fellow German cosmonaut Charles Glade (Wils). Both ends met after being introduced through a mutual friend who thought the two shared similar musical interests. Bryan and Wils instantly sparked a connection and songs began to emerge. The two would experiment late nights with tape machines, sharing music and production ideas, and writing songs. After only four months of meeting, an EP titled “Return to Zero” was written and the band was officially born with Ethan Ricks on Bass and Cody Hare on Drums.

“The six-song release is a mesmerizing psychedelic overtaking in the vein of 13th floor Elevators and the golden age of enlightening psychedelic rock. The tracks blend together so stylishly it makes me want to drink spiked strawberry lemonades in the sunshine. “Moonchild” is one of those unattainably perfect nights where the groove is set by smart, steady rhythm and lights fizz around your head even (and especially) when your eyes are closed. “Return to Zero” is straightforward, bluesy and a completely distinctive sound to come out of our Queen City.” –Shirley Griffith CltureMag

Since Return to Zero, Shadowgraphs put out a two song EP titled “Midnight Tea” containing a Syd era Pink Floyd cover of "See Emily Play" along with an unreleased Kinks cover of "This Strange Effect." The EP was featured on New Zealand music Blog “The Active Listener”.

Venomous Blossoms, Shadowgraphs follow-up 10 song LP, is finished and currently being pressed for Vinyl with an expected release date in April under the label Golden Brown out of Portland, OR. This LP was recorded all to 2” 24 track tape at Bryan’s home studio with the band, followed by mix down to 1/2” tape in Athens, GA at Chasepark Transduction Studios with Drew Vandenberg (Toro y Moi, Of Montreal, Deerhunter), and then finally shipped out to Telegraph Mastering in Portland, OR for Mastering.

In the meantime the band has been picking up momentum playing shows and festivals with acts such as Son Lux, Vinyl Williams, Sunflower Bean, Ringo Deathstarr, Shonen Knife, Natalie Prass, Neon Indian, and many more.

No images found!
Try some other hashtag or username