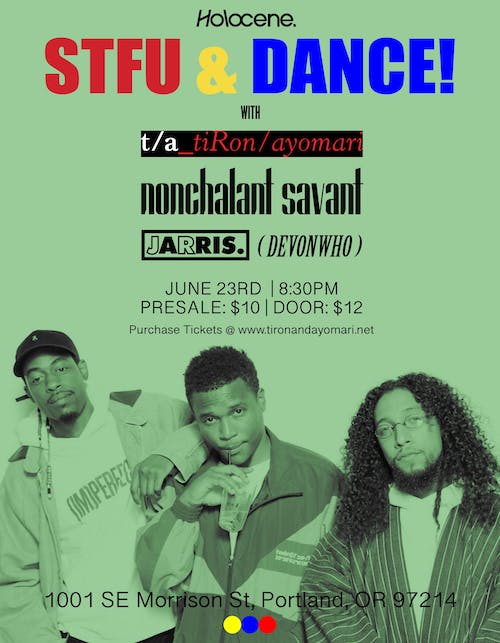 The genre bending LA duo TiRon & Ayomari (a.k.a. T&A) create music centered around pushing boundaries sonically while examining culture philosophically. They describe their sound as “urban americana” which is a blend of hip hop, jazz, blues and folk. All of the American music landscape rolled into one. Hip Hop’s Simon and Garfunkel, their sound is forward-thinking and honest, while still making you nod your head.

They recently toured with indie pop artist Lykke Li on her 2018 So Sad So Sexy U.S. Tour. They have been featured on KCRW (Los Angeles), Beats 1 Radio and Vibe Magazine. They have also performed live in studio on KEXP.

TiRon & Ayomari are currently working on their next album titled urbanamericana which is scheduled to be released on all platforms this Summer.

After releasing his debut album ¡Spark! in January of 2018, he hit the road with Grammy award-winning artist Miguel for both the War & Leisure Tour as well as the Ascension Tour. He also performed on the Smokin Grooves 2018 tour alongside Erykah Badu, H.E.R & Anderson .Paak.

Nonchalant Savant is currently working on PurgeTape, the follow up to ¡Spark!, which is scheduled to be released on all streaming platforms this Spring.

Devonwho is part of the Klipmode collective that includes Leaving records labelmates MNDSGN and Knxwledge. His take on blunted instrumental hip-hop favors the wobbly synths of the early ’80s.

Producer and DJ, J.R. Jarris, is a San Diego native heavily involved in the beat scene with roots in Hip Hop, 90’s R&B and house music.

As a frequent collaborator with the world famous artist collective known as Soulection, J.R. Jarris has a gained a reputation of playing the right music at the right time. He is also the founder of Hide and Go Freak, a popular dance party in San Diego.

J.R. Jarris is set to release his first single this Summer, “Let It Go” with TiRon & Ayomari along with San Francisco producer Mikos Da Gawd.