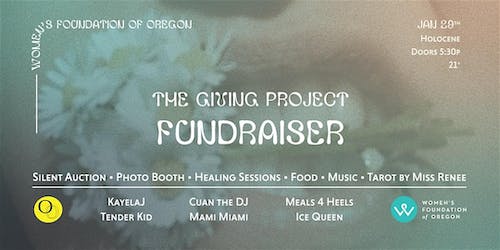 The Giving Project Fundraiser for the Women's Foundation of Oregon

In partnership with event producer JOOP JOOP, the Women's Foundation of Oregon is hosting a fundraiser for The Giving Project.

Our evening will also include music and performances by Cuan the DJ and Mami Miami of Noche Libre, Tender Kid & KayelaJ and video projections by Sean Chamberlain.

All tickets will be sliding scale of $5-50 with ALL proceeds going towards The Giving Project.

About The Giving Project:

A Giving Project is a model of giving that focuses on raising and distributing resources led by a group of folks who are cross-race and cross-class. The model values donations at all sizes and recognizes the value of resourcing the project in other ways - for example, through time, perspectives, and/or community connections.

The Women’s Foundation of Oregon will be the first gender-focused foundation in the country to apply this model. The pilot year will include the completion of a 6-month, Portland-based pilot cohort, ongoing development and improvement of the curriculum, structure, implementation, and organizational participation in the nationwide Giving Project Learning Community. This approach to grantmaking is deeply aligned with our commitment to advancing equity in philanthropy.