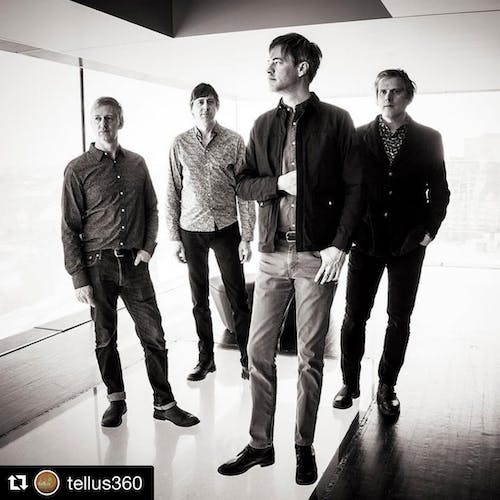 The Ocean Blue arrived as the 1980s drew to close, and their debut record on the famed Sire Records label in 1989 seemed to summarize the best of the musical decade. The band of four teenagers from Hershey, Pennsylvania quickly achieved widespread acclaim and radio & MTV airplay, with top 10 Modern Rock/College Radio hits like Between Something and Nothing and Drifting, Falling. They followed their debut release with the subtle and atmospheric Cerulean, which included perhaps their most beloved song, Ballerina Out of Control, and followed that with their highest charting pop album Beneath the Rhythm and Sound and the single Sublime, featuring a video of the band in the sublime landscape of Iceland. The band's fourth record for Mercury/PolyGram, See The Ocean Blue, was a departure to a more guitar rock sound of the 60s and 70s, but with the band's 80s DNA peeking through. After a busy decade of recording and touring, the band left the majors in the late 90s. Several independent releases and related touring followed in the 2000s, including 2000's Davy Jones Locker and 2004's Waterworks EP, and some wider international touring. In 2013, after much anticipation, the band released their first full length record in over 10 years, Ultramarine, on Korda Records, a Minneapolis-based label cooperative label the band helped launch that same year. The record was a welcome return for fans of the band and a younger generation of fans, and garnered widespread praise as one of their very best albums. In 2015, the band worked with Sire and Rhino Records to reissue their first 3 Sire albums on vinyl. The band marked the occasion by performing the first 2 albums in their entirety at limited concerts throughout the U.S. In 2016, the band did a full South American Tour where some of their most passionate fans reside.

This summer, the band releases their first new full length album in over 6 years.

The indie pop group, The Minders, was formed in Denver, Colorado in 1995 by Martyn Leaper and Robert Schneider (Apples in Stereo). The band started out as a recording project with Robert Schneider producing the first single (Build) which was released in early 1996 on the Elephant 6 imprint. The Minders quickly became a live act, with Joel Richardson on bass, Rebecca Cole (Wild Flag) on drums, and Jeff Almond on lead guitar; a follow-up single (Paper plane)was released later in 1996, wherethe band quickly gained popularity as a new member of the growing elephant six collective. The Minders would release four singles before delivering their first full-length album, Hooray for Tuesday, in1998 on SpinArt records.The Minders sound has evolved over the years. From its simple garage origins, the group has grown to incorporate complex arrangements that harken back to the heady days of nineteen sixties and seventies baroque pop music.Since 1998, the Mindershave resided in Portland, Oregon andhave released six records, each of whichhastackled different styles in pop and new wave. The Minders new album “Into the River” (September 2016release on Space Cassette records) Recorded at Jackpot! Recording Studio and Produced by Larry Crane (Elliott Smith, M.Ward, Go-Betweens and countless others) is a return to form after an 8-year absence. Their latest single, “It’s Gonna Breakout” is a bold, lush statement laden with hooks-that offers up a taste of things to come from an album that promises to be their most ambitious release yet.